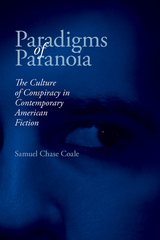 The recent popularity of The DaVinci Code and The Matrix trilogy exemplifies the fascination Americans have with conspiracy-driven subjects. Though scholars have suggested that in modern times the JFK assassination initiated an industry of conspiracy (i.e., Vietnam and the Pentagon Papers, Area 51, Iran-Contra Affair), Samuel Chase Coale reminds us in this book that conspiracy is foundational in American culture—from the apocalyptic Biblical narratives in early Calvinist households to the fear of Mormon, Catholic, Jewish, and immigrant populations in the 19th century.

Coale argues that contemporary culture—a landscape characterized by doubt, ambiguity, fragmentation, information overload, and mistrust—has fostered a radical skepticism so pervasive that the tendency to envision or construct conspiracies often provides the best explanation for the chaos that surrounds us.

Conspiracy as embodied in narrative form provides a fertile field for explorations of the anxiety lying at the heart of the postmodern experience. Thomas Pynchon's The Crying of Lot 49, Don DeLillo's Underworld, Toni Morrison's Jazz and Paradise, Joan Didion's Democracy, Tim O'Brien's In the Lake of the Woods, and Paul Auster's New York City Trilogy are some of the texts Coale examines for their representations of isolated individuals at the center of massive, anonymous master plots that lay beyond their control. These narratives remind us that our historical sense of national identity has often been based on the demonizing of others and that American fiction arose and still flourishes with apocalyptic visions.

AUTHOR BIOGRAPHY
Samuel Chase Coale is Professor of American Literature and Culture at Wheaton College in Massachusetts and author of Mesmerism and Hawthorne: Mediums of American Romance and The Mystery of Mysteries: Cultural Differences and Designs.
TABLE OF CONTENTS


Acknowledgments
1. The Conspiracy of Postmodernism as Suspect and Sublime
2. Conspiracy and Apocalypse in Popular Culture
3. Conspiracy in Fiction: From Da Vinci to Damascus
4. Joan Didion: The Fatal Glamour of Conspiracy
5. Don DeLillo: Mystic Musings in a Paranoid’s Paradise
6. Thomas Pynchon: The Functions of Conspiracy and the Performance of Paranoia
7. Toni Morrison’s Trilogy of Obsession: “Something Rogue” and Conspiracy’s Comeuppance
Epilogue
Notes
Works Cited
Index