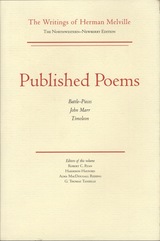 Although he surprised the world in 1866 with his first published book of poetry, Battle-Pieces and Aspects of the War, Herman Melville had long been steeped in poetry. This new offering in the authoritative Northwestern-Newberry series, The Writings of Herman Melville, with a historical note by Hershel Parker, is testament to Melville the poet. Penultimate in the publication of the series, Published Poems follows the release of Melville’s verse epic, Clarel (1876), and with it, contains the entirety of the poems published during Melville’s lifetime: Battle-Pieces, as well as John Marr and Other Sailors, with Some Sea-Pieces (1888), and Timoleon Etc. (1891).

Battle-Pieces and Aspects of the War has long been recognized as a great contribution to the poetry of the Civil War, comparable only to Whitman’s Drum-Taps. Its idiosyncrasies, many of them grounded in British poetry, kept it from immediate popularity, but it was not the production of a novice. Melville had made himself over into a poet in the late 1850s and had tried to publish a previous collection of poetry—now lost—in 1860.

John Marr and Other Sailors is a retrospective nautical book. Its portraits of sailors were influenced by Melville’s own experience of aging as well as by his long acquaintance with wasted mariners at the Sailors’ Snug Harbor on Staten Island, where his brother was governor.

The book modulates into "Sea-Pieces," including the grisly "Maldive Shark" and "To Ned," a powerful reflection on how Melville’s personal adventures with the Typee islanders in 1842 had accrued rich historical significance over the decades.

Thematically less unified, Timoleon Etc. contains poems with many European and exotic settings from ancient to modern times. The most famous are "After the Pleasure Party" and "The Age of the Antonines." Published in the last year of Melville’s life, some of the poems were first written many years earlier; for example, Melville copied "The Age of the Antonines" out for his brother-in-law in 1877, describing it as something found in a bundle of old papers. One whole section seems to have been almost entirely salvaged from the unpublished 1860 volume of poetry. As with the other volumes in the Northwestern-Newberry series, the aim of this edition of Published Poems is to present a text as close to the author’s intention as surviving evidence permits. To that end, the editorial appendix includes a historical note by Hershel Parker, the dean of Melville scholars, which gives a compelling, in-depth account of how one of America’s greatest writers grew into the vocation of a poet; an essay by G. Thomas Tanselle on the printing and publishing history of the works in Published Poems; a textual record that identifies the copy-texts for the present edition and explains the editorial policy; and substantial scholarly notes on individual poems.

AUTHOR BIOGRAPHY
HERMAN MELVILLE (1819–1891) was an American novelist, short story writer, essayist, and poet. He is best known for his novel Moby-Dick. His first three books gained much contemporary attention (the first, Typee, becoming a bestseller), and after a fast-blooming literary success in the late 1840s, his popularity declined precipitously in the mid-1850s and never recovered during his lifetime. When he died in 1891, he was almost completely forgotten. It was not until the "Melville Revival" in the early 20th century that his work won recognition, especially Moby-Dick, which was hailed as one of the literary masterpieces of both American and world literature. He was the first writer to have his works collected and published by the Library of America.