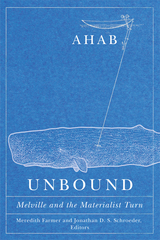 Why Captain Ahab is worthy of our fear—and our compassion

Herman Melville’s Captain Ahab is perennially seen as the paradigm of a controlling, tyrannical agent. Ahab Unbound leaves his position as a Cold War icon behind, recasting him as a contingent figure, transformed by his environment—by chemistry, electromagnetism, entomology, meteorology, diet, illness, pain, trauma, and neurons firing—in ways that unexpectedly force us to see him as worthy of our empathy and our compassion.

In sixteen essays by leading scholars, Ahab Unbound advances an urgent inquiry into Melville’s emergence as a center of gravity for materialist work, reframing his infamous whaling captain in terms of pressing conversations in animal studies, critical race and ethnic studies, disability studies, environmental humanities, medical humanities, political theory, and posthumanism. By taking Ahab as a focal point, we gather and give shape to the multitude of ways that materialism produces criticism in our current moment. Collectively, these readings challenge our thinking about the boundaries of both persons and nations, along with the racist and environmental violence caused by categories like the person and the human.

Ahab Unbound makes a compelling case for both the vitality of materialist inquiry and the continued resonance of Melville’s work.

Meredith Farmer is assistant teaching professor in English and the Environmental Program at Wake Forest University. She is author of the forthcoming book Melville’s Leaks: Science, Materialism, and the Reconstitution of Persons.

Jonathan D. S. Schroeder is visiting assistant professor of American studies at Brandeis University. He is editor of the forthcoming book The United States Governed by Six Hundred Thousand Despots: A True Story of Slavery.

4. Thinking with a Wrinkled Brow; or, Herman Melville, Catherine Malabou, and the Brains of New Materialism

6. Phenomenology beyond the Phantom Limb: Melvillean Figuration and Chronic Pain

7.‘The King is a Thing’; or, Ahab as Subject of the Unconscious: A Lacanian Materialist Reading

9. ‘this post-mortemizing of the whale’: The Vapors of Materialism, New and Old

11. The Whiteness of the Will: Ahab and the Matter of Monomania

12. Diet on the Pequod and the Wreck of Reason

13. Ahab’s After-Life: The Tortoises of ‘The Encantadas’

14. Israel Potter; or, the Excrescence

15.Melville, Materiality, and the Social Hieroglyphics of Leisure and Labor

Afterword: Melville Among the Materialists