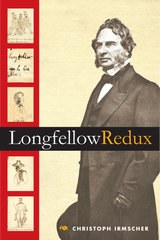 The time has come to take another look at Longfellow, America's most popular poet. Christoph Irmscher overturns the modern prejudice against Longfellow as the mere purveyor of literary comfort food. Examining his unpublished papers alongside letters written by his fans at home and abroad, Irmscher offers a fresh view of the poet's connection with his audience. Irmscher demonstrates that Longfellow saw literature as a transnational conversation breaking down social and linguistic barriers. For Longfellow, the poet was less Emerson's "liberating god" than a distributor of cultural goods democratically shared by authors and readers alike. Longfellow Redux is the first book-length study of Longfellow's poetry since 1966 and contains numerous illustrations, including previously unpublished pencil sketches by Longfellow himself.
AUTHOR BIOGRAPHY
Christoph Irmscher is a professor of English at Indiana University, Bloomington, and the author of The Poetics of Natural History: From John Bartram to William James and Public Poet, Private Man: Henry Wadsworth Longfellow at 200.
REVIEWS
A Choice Outstanding Academic Title (2007).
— CHOICE