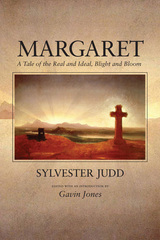 Praised at the time as the most emphatically "American" book ever written, Margaret is a breathtaking combination of female bildungsroman, utopian novel, and historical romance. First published in 1845, Sylvester Judd's novel centers on the fictional New England village of Livingston, where the young Margaret Hart strives to escape the poverty and vice of her surroundings by learning from a mysterious teacher, the "Master," and by entwining herself with the powers of nature. But when Margaret's brother is tried and hanged for murder, this rural community collapses, forcing Margaret to face the temptations of an urban underworld and to confront the intrigue of her family history. Margaret is the story of a young woman's attempt to create a new social order, founded on beauty and truth, in a land plagued by violence, debauchery, and political instability.

As Gavin Jones points out in his new introduction, Margaret perhaps stands alone in its creation of a female character who grows in social rather than domestic power. The novel also remains unique in its exploration of transcendental philosophy in novelistic form. Part eco-criticism, part seduction novel, part temperance tract, and part social history, Margaret is a virtual handbook for understanding the literary culture of mid-nineteenth-century America, the missing piece in puzzling out connections between writers such as Hawthorne, Melville, Whitman, and Thoreau.

Margaret was widely read and deeply influential on both British and American writers throughout the nineteenth century but controversial for its representations of alcoholism and capital punishment. Judd's novel remains resonant for today's readers as it overturns conventional views of the literary representation of women and the origins of the American Renaissance.
AUTHOR BIOGRAPHY
Gavin Jones is professor of English at Stanford University.