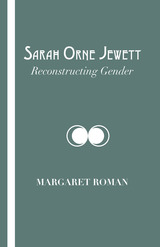 In her book Sarah Orne Jewett: Reconstructing Gender, Margaret Roman argues that one theme colors almost every short story and novel by the turn-of-the-century American author: each person, regardless of sex, must break free of the restrictive, polar-opposite norms of behavior traditionally assigned to men and women by a patriarchal society. That society, as seen from Jewett’s perspective during the late Victorian era, was one in which a competitive, active man dominates a passive, emotional woman. Frequently referring to Jewett’s own New England upbringing at the hands of an unusually progressive father, Roman demonstrates how the writer, through her personal quest for freedom and through the various characters she created, strove to eliminate the necessity for rigid and narrowly defined male-female roles and relationships.
With the details of Jewett’s free-spirited life, Roman’s book represents a solid work of literary scholarship, which traces a gender-dissolving theme throughout Jewett’s writing. Whereas previous critics have focused primarily on her best-known works, including “A White Heron,” Deephaven, A Country Doctor, and The Country of the Pointed Firs, Roman encompasses within her own discussion virtually all of the stories found in the nineteen volumes Jewett published during her lifetime. And although much recent criticism has centered around Jewett’s strong female characters, Roman is the first to explore in depth Jewett’s male characters and married couples.
The book progresses through distinct phases that roughly correspond to Jewett’s psychological development as a writer. In general, the characters in her early works exhibit one of two modes of behavior. Youngsters, free as Jewett was to explore the natural world of woods and field, glimpse the possibility of escape from the confining standards that society has set, though some experience turbulent and confusing adolescences where those norms have become more pressing, more demanding. At the opposite extreme are those who have mindlessly accepted the roles in which they have been trapped since youth—greedy, selfish men, dutiful women who tend emotionally empty houses, young couples unable to communicate either between themselves or with others—in short, characters who are too alienated within their roles to function as whole human beings.
On the other hand, Jewett approaches the men and women of her later works with a higher degree of optimism, in that each person is free to live according to the dictates of his or her inherent personality—each character is able to measure life from within rather than from without. This group includes the self-confident men who are not reluctant to present a nurturing side, and the warm, giving women who are unafraid of displaying a decided inner strength. As Roman summarizes, “In her writings, Jewett attempts to shift society’s focus from a grasping power over people to the personal development of each member of society.”
Ahead of her time in many ways, Sarah Orne Jewett confronted the Victorian polarized gender system, presaging the modern view that men and women should be encouraged to develop along whatever paths are most comfortable and most natural for them.
AUTHOR BIOGRAPHY
Margaret Roman is a professor of English at the College of Saint Elizabeth.
TABLE OF CONTENTS
Contents
Preface
Acknowledgments
Introduction: Jewett's "Housebreaker" versus Ruskin's "Queens": Liberation from the Victorian Home and Garden
Part I: Escape and Denial
1. Childhood Escapades
2. Adolescent Retreat
3. Fairy Godmothers
Part II: No Escape: The Acceptance of Dual Norms
4. Paralyzed Men
5. Aristocratic Women
6. Romance
7. The Standard Marriage
Part III: Breaking Free
8. Sexual Transformation
9. Women Unrestrained
10. Redeemed Men
11. The Postponed Marriage
12. "A White Heron": Symbolic Possibilities for Androgyny
13. Beyond Gender: The Country of the Pointed Firs
Afterword
List of Abbreviations
Select Bibliography
Index