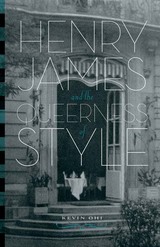 Kevin Ohi begins this energetic book with the proposition that to read Henry James—particularly the late texts—is to confront the queer potential of style and the traces it leaves on the literary life. In contrast to other recent critics, Ohi asserts that James’s queerness is to be found neither in the homoerotic thematics of the texts, however startlingly explicit, nor in the suggestions of same-sex desire in the author’s biography, however undeniable, but in his style.
For Ohi, there are many elements in the style that make James’s writing queer. But if there is a thematic marker, Ohi shows through his careful engagements with these texts, it is belatedness. The recurrent concern with belatedness, Ohi explains, should be understood not psychologically but stylistically, not as confessing the sad predicament of being out of sync with one’s life but as revealing the consequences of style’s refashioning of experience. Belatedness marks life’s encounter with style, and it describes an experience not of deprivation but of the rich potentiality of the literary work that James calls “freedom.” In Ohi’s reading, belatedness is the indicator not of sublimation or repression, nor of authorial self-sacrifice, but of the potentiality of the literary—and hence of the queerness of style.
Presenting original readings of a series of late Jamesian texts, the book also represents an exciting possibility for queer theory and literary studies in the future: a renewed attention to literary form and a new sounding—energized by literary questions of style and form—of the theoretical implications of queerness.
AUTHOR BIOGRAPHY
Kevin Ohi is associate professor of English at Boston College. He is the author of Innocence and Rapture: The Erotic Child in Pater, Wilde, James, and Nabokov.
TABLE OF CONTENTS


Introduction: On the Erotics of Literary of Style
1. Writing Queerness: Zeugma and Syllepsis in The Golden Bowl
2. The Burden of Residuary Comment: Syntactical Idiosyncrasies in The Wings of the Dove
3. Hover, Torment, Waste: Late Writings and the Great War
4. Lambert Strether's Belatedness: The Ambassadors and the Queer Afterlife of Style
Acknowledgments
Notes
Index