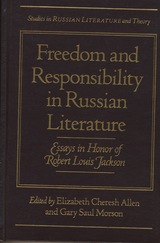 Freedom and Responsibility in Russian Literature: Essays in Honor of Robert Louis Jackson
edited by Gary Saul Morson and Elizabeth Cheresh Allen
Northwestern University Press, 1994
Cloth: 978-0-8101-1146-2
Robert Louis Jackson has long been recognized on both sides of the Atlantic as one of the foremost Dostoevsky scholars in the world. Freedom and Responsibility in Russian Literature collects twenty essays by distinguished scholars (many former students of Jackson's) and admiring colleagues on some of the foremost questions in Russian studies. Whatever the specific topic, these essays manifest a determination to exercise the critical independence and integrity exemplified by Jackson throughout his long career.
AUTHOR BIOGRAPHY
Elizabeth Cheresh Allen is Professor of Russian and Comparative Literature at Bryn Mawr College.


Preface: In Praise of a Friend
Victor Erlich

Freedom through Suffering: Vasilii Zhukovskii and His Ahasuerus
Victor Terras

"The Feasts of Ill Intention": Baratynskii and the Critics
Susanne Fusso and Howard Stern

Love, Attachment, and the "Objects of Our Regard":
Ivan Turgenev's "The Meeting" and Aleksandra Markelova's "In the Work Corner"
Jane T. Costlow

The Gambler: A Study in Ethnopsychology
Joseph Frank

The Reader's Responsibility in The Brothers Karamazov: Ophelia, Chermashnia, and the Palpable Obscure
Susan Amert

Self-Laceration and Resentment: The Terms of Moral Psychology in Dostoevsky and Nietzsche
Edith W. Clowes

Chekhov as a Representative of "Real Art"
Tomas Venclova

Truth and Illustration in Gorky: The Lower Depths and After
Victor Erlich

A Note on Nabokov's Anti-Darwinism; or Why Apes Feed on Butterflies in The Gift
Vladimir E. Alexandrov

Word and Image in Dostoevsky's Worlds: Robert Louis Jackson on Readings That Bakhtin Could Not Do
Caryl Emerson