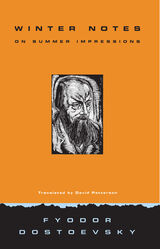 Winter Notes on Summer Impressions (?????? ??????? ? ?????? ????????????) is an early book-length essay by Russian author Fyodor Dostoevsky which he composed while traveling in western Europe. Many commentators believe that in the themes it explores, the essay anticipates his later work Notes from the Underground.

In June 1862, Dostoevsky left Petersburg on his first excursion to Western Europe. Ostensibly making the trip to consult Western specialists about his epilepsy, he also wished to see firsthand the source of the Western ideas he believed were corrupting Russia. Over the course of his journey he visited a number of major cities, including Berlin, Paris, London, Florence, Milan, and Vienna. He recorded his impressions in Winter Notes on Summer Impressions, which were first published in the February 1863 issue of Vremya (Time), the periodical of which he was the editor.

Among other themes, Dostoevsky reveals his Pan-Slavism, rejecting European culture as corrupt and exhorting Russians to resist the temptation to emulate or adopt European ways of life.
AUTHOR BIOGRAPHY
Fyodor Mikhailovich Dostoyevsky (Russian: Фёдор Миха́йлович Достое́вский; IPA: [ˈfʲodər mʲɪˈxajləvʲɪtɕ dəstɐˈjefskʲɪj]  ; 11 November 1821 – 9 February 1881 ) sometimes spelled Dostoevsky, was a Russian writer of novels, short stories and essays. Dostoyevsky's literary works explore human psychology in the troubled political, social and spiritual context of 19th-century Russian society. Although Dostoyevsky began writing books in the mid-1850s, his best remembered work was done in his last years, including Crime and Punishment, The Idiot and The Brothers Karamazov. He wrote eleven novels, three novellas, seventeen short novels and three essays and is often acknowledged by critics as one of the greatest and most prominent psychologists in world literature. Fyodor Dostoyevsky was born and raised within the grounds of the Mariinsky hospital in Moscow, in Russia.
REQUEST ACCESSIBLE FILE