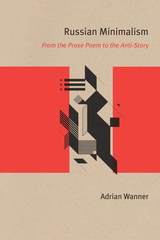 Russian Minimalism is the first book to apply the theoretical debate on the nature of the prose poem to Russian literature. Challenging traditional concepts of poetry and narrative prose, the prose poem is by nature a "subversive" form—and as such has drawn extensive interest in literature and criticism during the past two decades. In Russian Minimalism, Adrian Wanner uses the notion of minimalism, borrowed from the realm of American visual arts, as a critical tool for a historical investigation of the genesis and development of the Russian prose miniature, going back to the nineteenth and early twentieth century.

The paradoxical genre of the prose poem, developed by the French poet Charles Baudelaire, provides Wanner with an overarching theoretical rubric for a variety of works of Russian literature, ranging from Ivan Turgenev's "Poems in Prose" to a host of decadent, symbolist, realist, and futurist miniatures, including Fedor Sologub's "Little Fairy Tales," Aleksei Remizov's dreams, Vasilii Kandinskii's prose poems, and Daniil Kharms' absurdist ministories. His book demonstrates how the negativity inherent in the form of the prose poem transformed the overwrought lyricism of fin de siècle prose into the ascetic starkness of the twentieth-century minimalist anti-story.
AUTHOR BIOGRAPHY
Adrian Wanner is Liberal Arts Research Professor of Slavic Languages and and Comparative Literature at Pennsylvania State University. He is the author of Out of Russia: Fictions of a New Translingual Diaspora (Northwestern, 2011) and


Chapter 1:
Russian Minimalism and the Theory of the Prose Poem

Chapter 3:
The Russian Prose Poem as a Realist Genre