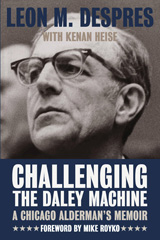 In 1955, south-sider Leon Despres was elected to the Chicago City Council-the same year that Paddy Bauler famously uttered that "Chicago ain't ready for reform." Ready or not, Chicago got twenty years of reform efforts from Despres, one of the few independents in the council and the most liberal alderman in the city. His demand to cut out the corrupt sale of city driveway permits made him enemies from the very beginning. Over the years his crusades to ban discrimination, preserve Chicago landmark buildings, and gain equality for African-Americans-when Daley-beholden African-American council members refused to help-threw wrench after wrench into the Machine. And, not incidentally, changed the city.

But Challenging the Daley Machine is more than a memoir. It's a historical portrait of the way things were done under the Boss, when changing times and a changing city forced the Machine to confront the problems Despres championed. His battles against the seemingly monolithic Machine are also an inspiration to anyone who is facing long odds, but is convinced he/she is on the side of right.
AUTHOR BIOGRAPHY
Leon M. Despres was born in 1908 in Chicago. He graduated from the University of Chicago Law School in 1929. Since leaving the Chicago City Council in 1975 he has served as a parliamentarian for the Jane Byrne and Harold Washington administrations and worked as an attorney, teacher, and lecturer. Despres lives in the Hyde Park neighborhood of Chicago.

Kenan Heise spent seven years as a Franciscan monk before starting a thirty-year career at the Chicago Tribune. His many books include Chicago the Beautiful (Bonus, 2001) and Resurrection Mary: A Ghost Story (Chicago Historical Bookworks, 1990).
TABLE OF CONTENTS

1. The Precinct Captains Celebrate Richard J. Daley's Election
2. An Accidental Alderman Is Elected
3. My Beloved Hyde Park: Home for Ninety-three Years
4. Urban Nature at My Doorstep
5. I Am Told What to Expect in the City Council
6. Ending the Sale of Driveway Permits: My First Victory
7. Richard J. Daley: An Overrated Powerhouse
8. Saving the City's Outdoor Museum
9. The Rot of Political Patronage
10. Getting Reelected: An Even Tougher Battle
11. Sparring with Daley
12. I Get Shot
13. Our City's Basic Problem
14. An Endless Fight for Equality
15. Chicago Children Die from Lead Poisoning
16.Council Colleagues Go to Prison
17. Daley's Police Spy on Me
18. Seeking Equal Treatment for Women
19. My Secret Weapon
20. Twenty Years Come to an End
21. Parliamentarian and Member of the Chicago Plan Commission

Appendix 1: City Watchdog Calling It Quits: Leon Despres to End Ten Years on Plan Commission
Appendix 2: The Most Segregated City in the North—Chicago
Appendix 3: The Lone "Negro" Spokesman in Chicago's City Council
Appendix 4: Excerpts from "A Report on the City of Chicago Employment Discrimination against Women"
Appendix 5: The Despres Papers