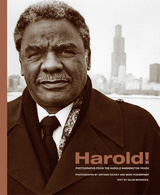 Northwestern University Press, 2007
Paper: 978-0-8101-2446-2
This handsome book captures in words and pictures the powerful emotions that circled around one man in Chicago in the early 1980’s: Harold Washington. More than one hundred pictures, from candid shots on the campaign trail to triumphant public appearances, give readers a window onto a man who won over an entire city. Washington’s mayoral win represented a faltering of the previously all-powerful Chicago Machine, and his campaign was a part of a larger civil rights crusade that forged unity in the black community in Chicago.

Antonio Dickey and Marc PoKempner were there with Washington throughout 1982-87, Dickey as his campaign and personal photographer and PoKempner on assignment for the New York Times, People, and Time, capturing the force of his personality and the inspiration he brought to Chicago. Their photographs have become the definitive documentation of the Harold years and were featured in the Chicago Historical Society’s 2003–2004 exhibit “Harold Washington: The Man and the Movement.” They were there for his underdog rise, his win, his first term, and his untimely death just seven months into his second term. The year 2007 marks the twentieth anniversary of Washington’s death, and this loving tribute in words and pictures will keep his message alive for future generations.
AUTHOR BIOGRAPHY

Salim Muwakkil is a senior editor of In These Times and an op-ed columnist for the Chicago Tribune. In the 1980s he wrote exclusively about Harold Washington and politics in Chicago.

Antonio Dickey, a former Chicago Daily Defender photographer, volunteered to serve as the full-time campaign photographer when Harold Washington announced his mayoral candidacy in 1982. He stayed on as official photographer to Chicago mayors and currently works for Richard M. Daley. His work has been exhibited at the Chicago Historical Society, the Harold Washington Library, and other venues.

Independent photojournalist Marc PoKempner is known for his documentation of blues in Chicago, music and life in Cuba, and the work of community-minded corporations seeking to solve social problems. His work is in the permanent collection at the Art Institute of Chicago, where he has also had solo exhibitions. He covered Harold Washington nearly full time for the ChicagoReader and the Midwest bureaus of Time and People.

"Every journalist wants to bear witness to history as it is being made. For those of us who covered the tragedies and triumphs of the Harold Washington era, the presence of Antonio Dickey and Marc PoKempner, was part of the scenery, visual and audible confirmation as they snap-snapped their shutters that history was happening here. Thanks to their captured moments, a new generation can share what we saw, guided by the eloquently streetwise narration of another eyewitness, Salim Muwakkil. His perspective, like mine, has only been enriched by the hard-earned lessons of passing time. Time helps one appreciate Harold Washington, not only the first black mayor of a city not always associated with brotherly love, but also as a transformational leader with a prophetic vision and perceptive wit. He was an insightful coalition-builder who broke away from the nation's most notorious big-city machine, challenged its dominance and won. He did not live to lead his great American city into the new century, as he often hoped he would. But he prepared the way for those who do." --Clarence Page, Chicago Tribune columnist and editorial board member

"This wonderful book of Marc PoKempner's and Antonio Dickey's photographs of Harold Washington and the rocky road he traveled to the Mayoralty, plus the perceptive commentary of Salim Muwakkil -- is a natural for any thoughtful Chicagoan to have around the house. It has everything: charm, wild kicks in the groin by his opponents, and hope. It is a winning book, not only for African-Americans but citizens of all complexions and faiths."--Studs Terkel