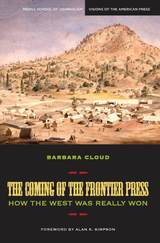 The Coming of the Frontier Press: How the West Was Really Won
by Barbara Cloud
foreword by Alan K. Simpson
Northwestern University Press, 2008
Paper: 978-0-8101-2508-7

From the first story about the discovery of gold in California in 1848 to features on today’s western boomtowns, western expansion and journalism have had a symbiotic relationship. By examining this relationship along its entire timeline, this book argues that newspapers played a crucial role in pushing aside both wildlife and Native Americans to make room for the settlers who would become their readers. The western news sheets not only shaped reader attitudes but also undertook innovations in content and appearance that would affect newspapers nationwide.

Barbara Cloud is a professor emeritus at the Hank Greenspun School of Journalism and Mass Communication at the University of Nevada. She has worked in journalism in the United States and abroad as a reporter, editor, and consultant. Her books include The Businesses of Newspapers on the Western Frontier, Media Law in Nevada, and Minister to the Cherokees. She lives in Henderson, Nevada.

Foreword by Alan K. Simpson, who is a former U.S. Senator, the former director of the Institute of Politics at Harvard University's John F. Kennedy School of Government, and the author of Right in the Old Gazoo: A Lifetime of Scrapping with the Press.
TABLE OF CONTENTS