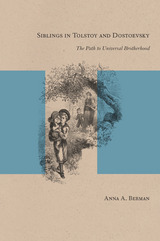 In close readings of their major novels, Berman shows how both writers portray sibling relationships as a stabilizing force that counters the unpredictable, often destructive elements of romantic entanglements and the hierarchical structure of generations. Power and interconnectedness are cast in a new light. Berman persuasively argues that both authors gradually come to consider siblinghood a model of all human relations, discerning a career arc in each that moves from the dynamics within families to a much broader vision of universal brotherhood.

ANNA A. BERMAN is an assistant professor in the Department of Languages, Literatures, and Cultures at McGill University.

"Berman’s arguments throughout are nuanced and carefully supported by meticulous readings as well as impressive scholarly knowledge... At present numerous scholars are considering the family novel in Russia. Berman has joined this stellar group who ask fundamental questions important to any reader (‘What is a family?’ ‘Who is my brother or my neighbour?’), and like them is able to consider answers to these questions that are based both on close readings of the text and broadly based critical knowledge." —Slavic and East European Review