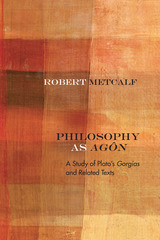 In Philosophy as Agôn: A Study of Plato's Gorgias and Related Texts, Robert Metcalf offers a fresh interpretation of Plato's dialogues as dramatic texts whose philosophy is not so much a matter of doctrine as it is a dynamic, nondogmatic, and open-ended practice of engaging others in agonistic dialogue.

Metcalf challenges prevailing interpretations according to which the agôn (contest or struggle) between the interlocutors in the dialogues is inessential to Plato's philosophical purpose, or simply a reflection of the cultural background of ancient Greek life. Instead, he argues that Plato understands philosophy as essentially agonistic—involving the adversarial engagement of others in dialogue such that one's integrity is put to the test through this engagement, and where the agôn is structured so as to draw adversaries together in agreement about the matters at issue, though that agreement is always open to future contest.

Based on a careful reading of the Gorgias and related Socratic dialogues, such as Apology and Theaetetus, Metcalf contends that agôn is indispensable to the critique of prevailing opinions, to the transformation of the interlocutor through shame-inducing refutation, and to philosophy as a lifelong training (askêsis) of oneself in relation to others.
AUTHOR BIOGRAPHY
ROBERT METCALF is a professor of philosophy at the University of Colorado, Denver.
TABLE OF CONTENTS
Contents
Acknowledgments
Introduction
Chapter 1. The Practice and Problematization of Philosophy as Agôn: Plato's Apology and Theaetetus
Chapter 2. Elenchos as Agôn: Socrates, Gorgias, and Polus
Chapter 3. Contesting the Dêmos: Socrates and Callicles
Chapter 4. Seeing the Agôn through a Mythos
Notes
Bibliography
Index
REQUEST ACCESSIBLE FILE