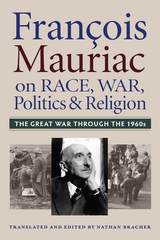 Nathan Bracher's François Mauriac on Race, War, Politics, and Religion: The Great War Through the 1960s consists of a selection of some ninety editorials penned by the Catholic novelist and intellectual François Mauriac, who received the Nobel Prize for literature and who was admitted to the Académie Française in 1933. As is often the case for prominent writers and intellectuals in France, Mauriac became active in political punditry early in his career, at the time of the First World War. Intensifying notably in the tumultuous years of the 1930s on, this activity continues to expand over the next five decades. After 1952, Mauriac's editorials came to represent the most important dimension of his intellectual activity. He was, to cite the prominent journalist and intellectual Jean Daniel of Le Nouvel Observateur, Frances most distinguished and formidable editorialist of the twentieth century.
TABLE OF CONTENTS
Contents
Acknowlegments
Introduction: The Artist as Political Pundit
1. The Gathering Storm of Conflict in the 1930s
2. The Second World War
3. Postwar Trials and Tribulations
4. Decolonization and the War in Algeria
5. The Era of Charles De Gaulle
6. From Here to Eternity
Bibliography
Index