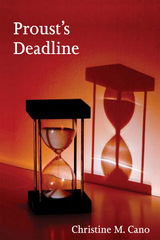 Marcel Proust’s multivolume masterpiece, À la recherche du temps perdu, began to appear in 1913. Over the next fifty years, it gained a reputation as one of the greatest literary works of the twentieth century. But the novel’s classic image as a completed work was later shattered by the discovery of unpublished drafts, and the “war of the Prousts” has kept scholars arguing over its definitive form ever since.

Christine M. Cano’s Proust’s Deadline presents a concise history of the publishing and reception of À la recherche du temps perdu, and sorts out the most important issues that have arisen from the ensuing debates about the text. She ultimately shows how this quintessential “book about time” tells another story about time’s passage: the story of Proust’s mortal confrontation with the temporality of writing, publishing, and reading.
AUTHOR BIOGRAPHY

Christine Cano is an associate professor of French and comparative literature at Case Western Reserve University.

“An energetic and rewarding read, Proust’s Deadline offers both a publication history and a fresh approach as to how Proust and his scholars continue to confront the threats of contingency and time.”--Nineteenth-Century French Studies