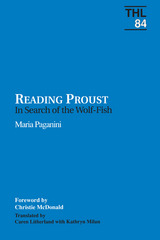 Reading Proust was first published in 1994.What readers of Proust in English translation miss, along with most of his critics, is how precisely his writing works, how exactly his subtle craftsmanship weaves the spell that seems to enchant and distract those who encounter it. Even critics who take up the idiosyncrasies of Proust's text, Maria Paganini asserts, refuse to test its limits for fear of running into the writer's deliberate opacities. Reading Proust puts an end to this interpretive arrest by focusing on the specificity of Proustian writing, revealing the patterns of thought and play of words peculiar to Proust's language, and showing how these metamorphose throughout La Recherche du temps perdu. Her work offers a new model for reading fictional prose, one that replaces the critical "why?" with the more practical and productive "how?" In well-known passages from La Recherche as well as often neglected ones, Paganini exposes a series of cryptic puns developed around three letters of the alphabet, "A," "R," and "T," which trigger many permutations in French: tare (flaw), rat, rater (to miss), and art. She shows how extensive passages of Proust's writings are articulated around a repetitive four-beat scansion using tare, rat, rater or arrêt, and art as its dominant theme. This four-beat scansion also translates into movement in space-point of departure, travel to the horizon, limit point, return-and Paganini uses such "promenades" to gain access to the text's mode of production. Her reading draws new meaning from this familiar yet enigmatic work and opens a new perspective on important issues such as the emergence of involuntary memory or Proust's approach to sexuality. Most significantly, though, Paganini confronts us in a very concrete way with Proust's craft, an approach that explains why and how his work continues to attract and fascinate readers. Maria Paganini is professor emerita of French at the University of Minnesota. She is the author of Flaubert, la présence de l'écrivain dans l'oeuvre.