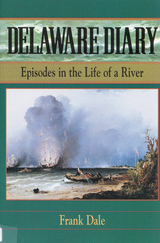 Everyone knows that Washington crossed the Delaware and turned the "times that try men's souls" into a triumphal victory. And today residents of and visitor to New York, New Jersey, and Pennsylvania enjoy canoeing and tubing, shad fishing and bed and breakfasting along the Delaware. Have you ever wondered about the life of the river in the two centuries in between? The Delaware was the scene of important events after the Revolution, too- an early and tragic experiment in steam propulsion, a notoriously lethal prison camp in the Civil War, memorable floods, hurricanes, ice storms, and even a furious battle with the U.S. army.

Frank Dale, who has lived near the Delaware all of his life, has burrowed into old newspaper files and archives and traced down eyewitnesses o the life of the Delaware. Rivers were the highways of choice in early America, and the Delaware presented much greater challenges than the nearby Hudson. Filled with rapid, falls, and inconvenient rocks, the river refused to accommodate itself easily to the needs of commerce. The rivermen who ventured down the Delaware on massive timber rafts or Durham boats filled with iron ore earned a deserved reputation for pure ornery courage. Later entrepreneurs tried steamboats, canals, and bridges to attempt to harness and exploit this most unexploitable river, with decidedly mixed results. In recent times, the Tocks Island Dam was defeated by a community that had come to admire the river's stubborn resistance to being conquered and harnesses to human ends. Canoeists and waterside strollers can now appreciate its unspoiled beauties.
REVIEWS
A diverting collection of Delaware River lore. . . . Homey history, like something your grandfather might have recited before the living room fire.
— Kirkus Reviews

[These] essays give the river and the usually quiet backwater communities along its shores a place on the shelf with books about the bigger guys, such as the majestic Hudson and the grand Mississippi.
— Booklist