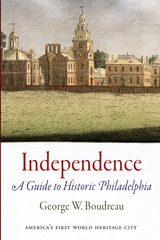 An Intimate Illustrated Tour of America’s Most Iconic Colonial City

From its beginning as a haven for English Quakers in the colony William Penn founded in 1681, the city of Philadelphia prospered, becoming a leading port in the English Atlantic World and a center of American culture and politics. Grounded in enlightenment ideals, Philadelphia attracted diverse settlers from the Old and New Worlds. By the 1760s, a cash-strapped England set its sights on taxing the American colonies to pay its debts. Philadelphia assumed roles as a center of revolutionary protests, a meeting place for colonial delegates to decide on independence and a new form of government, and, finally, the first capital of the United States of America.

Richly illustrated with both new photography and an amazing array of early American art drawn from the collections of some of America’s leading museums and archives, Independence: A Guide to Historic Philadelphia reveals the stories of the persons who experienced the early years of the new nation in America’s first capital. Based on meticulous research, Independence walks its readers through the lives of the residents and visitors of the revolutionary city, and through the streets and buildings that they knew. Famous names are here: Franklin, Jefferson, Adams, Washington. But Independence also focuses on the fascinating stories of less famous American founders. Enslaved and free, women and men, rich and poor, patriot and Tory, shaped Philadelphia’s and America’s experience in the revolutionary era, and all have their say here. In addition, this guide tells the stories of the iconic buildings and streets where America was founded. The book explores the dozens of buildings that make up Independence National Historical Park and connects these with neighboring sites that are also intimately associated with the story of America’s birth.

Independence will enrich the experience of those who travel to these historic sites, as well as offer a vivid and fascinating story for the general reader.

GEORGE W. BOUDREAU is a cultural historian of eighteenth-century America, specializing in the history of early Pennsylvania, the life of Benjamin Franklin, and material culture. An active public historian, he has worked with numerous historic sites in the Philadelphia region and was the founding editor of Early American Studies: An Interdisciplinary Journal. He teaches history at Penn State Capital College and lives in Philadelphia.