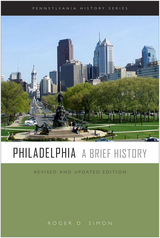 Understanding Philadelphia’s history requires that we understand that nothing is inevitable; history is not made by abstract forces, but by the decisions of real individuals as they conduct their lives. With its insightful analysis and engaging prose, Philadelphia provides an accessible and readable overview of the history of the Quaker City from its founding by William Penn to the deindustrialization and gentrification of the early twenty-first century. Roger Simon asserts that the history of Philadelphia is a story of the efforts to sustain economic prosperity while fulfilling community needs, and the continued tension between those priorities.

Philadelphia devotes considerable attention to the evolving physical development of the city and to the social conditions and class structure of the people. Three dozen maps and illustrations enrich this edition, which has been fully updated and revised to reflect new scholarship on Philadelphia’s role in the post-industrial present and the diverse communities that incorporated women and minorities into the economic and social fabric of the city.

Published in association with the Pennsylvania Historical Association

Roger D. Simon is a Professor of History at Lehigh University. He is the author of The City Building Process: Housing and Services in New Milwaukee Neighborhoods, 1880-1910 and co-author of Lives of Their Own: Blacks, Italians and Poles in Pittsburgh, 1900-1960.