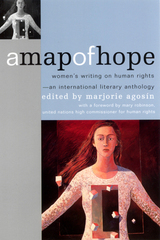 The first international anthology to explore women’s human rights from a literary perspective.

More than half a century after the United Nations Declaration of Human Rights, women throughout the world still struggle for social and political justice. Many fight back with the only tools of resistance they possess—words. A Map of Hope presents a collection of 77 extraordinary literary works documenting the ways women writers have spoken out about human rights issues.

Writers young and old, known and unknown, explore the dimensions of terror, the unspeakable atrocities of war, and the possibilities of resistance and refusal against all odds. Their poems, essays, memoirs, and brief histories examine issues that affect the condition of women in war, prison camps, exile, and as victims of domestic and political violence.

A Map of Hope presents diverse women writers who have created a literature of global consciousness and justice. Their works give a face, an image, and a human dimension to the dehumanization of human rights violations. The collection allows readers to hear voices that have decided to make a difference. It goes beyond geography and ethnic groups; writers from around the globe are united by the universal dimensions of horror and deprivation, as well as the unique common struggle for justice and solidarity.

AUTHOR BIOGRAPHY
Margorie Agosin was recently honored with the United Nations Leadership Award for Human Rights. A professor of Spanish at Wellesley College, she has authored many books, among them An Absence of Shadow, Ashes of Revolt: essays on Human Rights, Melodious Woman, Always from Somewhere Else, My Jewish Fathers, and Dear Anne Frank.