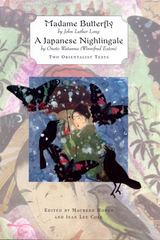 Madame Butterfly (1898) and A Japanese Nightingale (1901) both appeared at the height of American fascination with Japanese culture. These two novellas are paired here together for the first time to show how they defined and redefined contemporary misconceptions of the "Orient." This is the first reprinting of A Japanese Nightingale since its 1901 appearance, when it propelled Winnifred Eaton (using the pseudonym Onoto Watanna) to fame. John Luther Long's Madame Butterfly introduced American readers to the figure of the tragic geisha who falls in love with, and is then rejected by, a dashing American man; the opera Puccini based upon this work continues to enthrall audiences worldwide. Although Long emphasized the insensitivity of Westerners in their dealings with Asian people, the ever-faithful Cho-Cho-San typified Asian subservience and Western dominance. A Japanese Nightingale takes Long's revision several steps further. Eaton's heroine is powerful in her own right and is loved on her own terms. A Japanese Nightingale is also significant for its hidden personal nature. Although Eaton's pen name implied she was Japanese, she was, in fact, of Chinese descent. Living in a society that was virulently anti-Chinese, she used a Japanese screen for her own problematic identity, and A Japanese Nightingale tells us as much about the author's struggle to embrace her Asian heritage as it does about the stereotypes she contests.