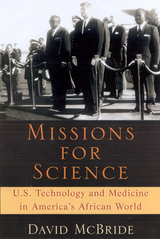 Missions for Science traces the development and transfer of technology in four Atlantic regions with populations of predominantly African ancestry: the southern United States, the Panama Canal Zone, Haiti, and Liberia. David McBride explores how the pursuit of the scientific ideal, and the technical and medical outgrowths of this pursuit, have shaped African diaspora populations in these areas, asking:

--What specific technologies and medical resources were transferred by U.S. institutions to black populations centers and why?

--How did the professed aims of U.S. technical projects, public health, and military activities differ from their actual effects and consequences?

--Did the U.S. technical transfer amount to a form of political hegemony?

--What lessons can we learn from the history of technology and medicine in these key geographic regions?

Missions for Science is the first book to explain how modern industrial and scientific advances shaped black Atlantic population centers. McBride is the first to provide a historical analysis of how shifting environmental factors and disease-control aid from the United States affected the collective development of these populations. He also discusses how independent black Atlantic republics with close historical links to the United States independently envisioned and attempted to use science and technology to build their nations.
AUTHOR BIOGRAPHY
David McBride is a professor of African American History at Pennsylvania State University and the author of Integrating the City of Medicine: Blacks in Philadelphia Health Care, 1910-1965 and From TB to AIDS: Epidemics Among Urban Blacks Since 1900.
TABLE OF CONTENTS