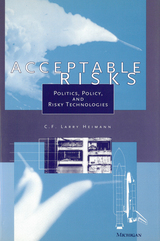 Complex and risky technologies--technologies such as new drugs for the treatment of AIDS that promise great benefits to our society but carry significant risks--pose many problems for political leaders and the policy makers responsible for overseeing them. Public agencies such as the Food and Drug Administration are told by political superiors not to inhibit important technological advances and may even be charged with promoting such development but must also make sure that no major accidents occur under their watch. Given the large costs associated with catastrophic accidents, the general public and elected officials often demand reliable or failure-free management of these technologies and have little tolerance for the error.
Research in this area has lead to a schism between those who argue that it is possible to have reliable management techniques and safely manage complex technologies and others who contend that such control is difficult at best. In this book C. F. Larry Heimann advances an important solution to this problem by developing a general theory of organizational reliability and agency decision making. The book looks at both external and internal influences on reliability in agency decision making. It then tests theoretical propositions developed in a comparative case study of two agencies involved with the handling of risky technologies: NASA and the manned space flight program and the FDA's handling of pharmaceuticals--particularly new AIDS therapies.
Drawing on concepts from engineering, organizational theory, political science, and decision theory, this book will be of interest to those interested in science and technology policy, bureaucratic management and reform, as well as those interested in health and space policy.
C. F. Larry Heimann is Assistant Professor of Political Science, Michigan State University.
TABLE OF CONTENTS
Contents
Figures and Tables
Preface
Acknowledgments
Chapter 1. Understanding Agency Failure
Chapter 2. Reliable Decision Making and the Influence of Political Incentives
Chapter 3. Shifting Political Incentives at NASA and the FDA
Chapter 4. Organizational Structure and the Design of Reliable Systems
Chapter 5. Subordinate Expertise and Reliable Organizations
Chapter 6. Systems versus Components: Seeking Greater Reliability at NASA and the FDA
Chapter 7. Acceptable Risks
References
Index
REQUEST ACCESSIBLE FILE