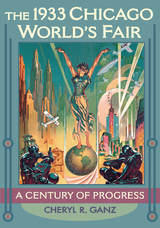 But not everyone at Chicago's 1933 exposition had abandoned notions of progress that entailed social justice and equality, recognition of ethnicity and gender, and personal freedom and expression. The fair's motto, "Science Finds, Industry Applies, Man Conforms," was challenged by iconoclasts such as Sally Rand, whose provocative fan dance became a persistent symbol of the fair, as well as a handful of other exceptional individuals, including African Americans, ethnic populations and foreign nationals, groups of working women, and even well-heeled socialites. Cheryl R. Ganz offers the stories of fair planners and participants who showcased education, industry, and entertainment to sell optimism during the depths of the Great Depression. This engaging history also features eighty-six photographs--nearly half of which are full color--of key locations, exhibits, and people, as well as authentic ticket stubs, postcards, pamphlets, posters, and other it

AUTHOR BIOGRAPHY
Cheryl R. Ganz is the chief curator of philately at the Smithsonian National Postal Museum, Washington, D.C. She was the curator and designer of the "Pots of Promise" exhibition for the Jane Addams Hull-House Museum, and is the coeditor of Pots of Promise: Mexicans and Pottery at Hull-House, 1920-40.
REVIEWS
Recipient of the Smithsonian Institution Secretary's Research Prize, 2010.
— Smithsonian Institution Secretary