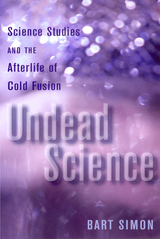 Undead Science examines the story of cold fusion, one of the most publicized scientific controversies of the late twentieth century. In 1989 two Utah-based “discoverers” claimed to have developed an electrochemical process that produced more energy than was required to initiate the process. Finding no other explanation, the researchers described their findings as some kind of nuclear reaction. If they were correct, an important new energy source would have been found. Objections surfaced quickly, and in the year that followed, hundreds of scientists worldwide attempted to reproduce these results. Most, though not all, failed, and the controversy became increasingly antagonistic. By 1990, general scientific opinion favored the skeptics and experimental work went into a steep decline. Nevertheless, many scientists continue to do research in what Bart Simon calls this “undead science.”

Simon argues that in spite of widespread skepticism in the scientific community, there has been a continued effort to make sense of the controversial phenomenon. Researchers in well-respected laboratories continue to produce new and rigorous work. In this manner, cold fusion research continues to exist long after the controversy has subsided, even though the existence of cold fusion is circumscribed by the widespread belief that the phenomenon is not real.

The survival of cold fusion signals the need for a more complex understanding of the social dynamics of scientific knowledge making, the boundaries between experts, intermediaries, and the lay public, and the conceptualization of failure in the history of science and technology.

AUTHOR BIOGRAPHY
Bart Simon is an assistant professor in the department of sociology and anthropology at Concordia University in Montreal, Canada.
TABLE OF CONTENTS