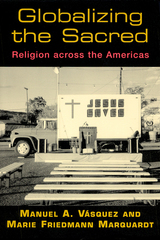 French and German tourists join Mexican migrant workers to venerate the image of the Virgin Mary at a strip mall in Florida; Latino gang members, deported from the United States to home countries they barely know, find Jesus in transnational churches; U.S. evangelicals use electronic media to preach a “neo liberal” gospel of wealth and health to landless peasants in remote indigenous villages in Guatemala. These are just some examples of how religion in the Americas today intersects in complex ways with the economic, political, and cultural dimensions of globalization.

Drawing on case studies in the United States and Latin America, Manuel A. Vásquez and Marie Friedmann Marquardt explore the evolving roles of religion in the Americas in the face of globalization, transnational migration, the rapid growth of culture industries, the rise of computer mediated technologies, and the crisis of modernity. Combining ethnographic research in local congregations, studies of material culture and sacred space, textual analyses, and approaches to mass and electronic media, the authors challenge dominant paradigms in sociology of religion, such as the secularization and rational choice models. Further, the book offers alternative theoretical and methodological tools to understand the increasing complexity of religious life in the Americas.

By illustratingthe challenges that scholars and students must confront in order to understand the complexity of today’s religious landscape, Globalizing the Sacred makes both important theoretical and methodological contributions to the study of religion’s role in social change.

AUTHOR BIOGRAPHY
Manuel A. Vásquez is an associate professor of religion at the University of Florida, Gainesville. He is the author of The Brazilian Popular Church and the Crisis of Modernity and is the co-editor of Christianity, Social Change, and Globalization in the Americas (Rutgers University Press).

Marie Friedmann Marquardt is a Ph.D. candidate in the sociology of religion at Emory University.