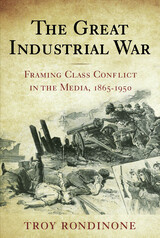 The Great Industrial War, a comprehensive assessment of how class has been interpreted by the media in American history, documents the rise and fall of a frightening concept: industrial war. Moving beyond the standard account of labor conflict as struggles between workers and management, Troy Rondinone asks why Americans viewed big strikes as "battles" in "irrepressible conflict" between the armies of capital and laborùa terrifying clash between workers, strikebreakers, police, and soldiers.

Examining how the mainstream press along with the writings of a select group of influential reformers and politicians framed strike news, Rondinone argues that the Civil War, coming on the cusp of a revolution in industrial productivity, offered a gruesome, indelible model for national conflict. He follows the heated discourse on class war through the nineteenth century until its general dissipation in the mid-twentieth century. Incorporating labor history, cultural studies, linguistic anthropology, and sociology, The Great Industrial War explores the influence of historical experience on popular perceptions of social order and class conflict and provides a reinterpretation of the origins and meaning of the Taft-Hartley Act and the industrial relations regime it supported.

AUTHOR BIOGRAPHY
Troy Rondinone is an associate professor of history at Southern Connecticut State University.
REVIEWS
"The Great Industrial War fills a huge gap in the study of news media and history."
— Christopher R. Martin, author of Framed! Labor and the Corporate Media

"The Great Industrial War is a beautifully written, well-argued book that will stand out as a distinct and original work within American labor history."
— Jennifer Klein, Yale University

"A novel way to consider the representation of labor conflict in the United States and offers a real insight into American labor history."
— American Historical Review

"Rondinone should be commended for taking on such a broadly significant topic. Historians of labor, business, and the media will benefit from reading The Great Industrial War."
— The Historian

TABLE OF CONTENTS
Contents
Acknowledgments
Introduction - A Question of the Age
1 - With Colors Flying—Strikes in Antebellum America
2- Drifting toward Industrial War—The Great Strike of 1877 and the Coming of a New Era
3 - The March of Organized Forces—Framing the Industrial War, 1880–1894
4 - The Emergence of the “Great Third Class”—The “People” and the Search for an Industrial Treaty
5 - The Fist of the State in the Public Glove—Federal Intervention in the Early Twentieth Century
6 - Co-opting the Combatants—Pluralism on the Front Lines
7 - A Kind of Peace—The Advent of Taft-Hartley
Conclusion - The End of Class Conflict?
Notes
Bibliography
Index
About the Author