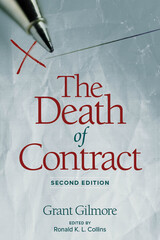 The Death of Contract is a masterful commentary on the common law, especially the law of promissory obligation known as contracts. In this slim and lively book, the late Yale law professor Grant Gilmore examines the birth, development, death, and even the resurrection of a body of American law. It is both a modern-day reply to and a funeral oration for an American legal classic—Oliver Wendell Holmes’s The Common Law.

This new edition, with an instructive and timely foreword by Ronald K. L. Collins, challenges anyone interested in the life of the law to think about where it has come from and where it is tending. As such, The Death of Contract still retains its vitality in the brave new world of the law known as contracts. A new bibliography of early reviews and new responses reveals how considerable the interest was, and continues to be, in this modern anti-classic.
REVIEWS
“Anyone interested in the fate of modern law will want to ponder the large and provocative claims advanced in this witty and insightful book.”
—Anthony T. Kronman, Dean, Yale Law School


“Gilmore altered forever the way we look at contract law—much like Gould did with the Goldberg Variations.”
—Dennis Patterson, Rutgers University School of Law