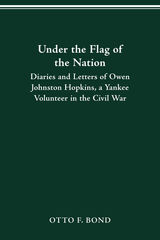 From these diaries and letters of a soldier in the Union Army emerges a revealing portrait of their author, a man caught up in a life-and-death struggle of national import. Compiled from the diaries kept by Owen Johnston Hopkins while he was on duty with the 42nd and 182nd regiments, Ohio Volunteer Infantry, and from letters to his family and friends, this book gives a clear picture of the motives, attitudes, and sentiments of a Yankee soldier during the Civil War.

Owen Hopkins was a young man brought to maturity by the agony of war, but in spite of the horror of battle and the tedium of life in camp, he maintained a lively sense of humor and a constant devotion to the ideals for which he fought. The Civil War in these pages is a savage, vindictive conflict fought with canister, "minnie balls," grapeshot, the Enfield rifle, and the bayonet. Only seventeen when he enlisted in 1861, Hopkins was a foot soldier and a witness to the action that took place on the field of battle.

A vital part of Hopkins's life in the army was his correspondence with Julia Allison, who lived in his hometown of Bellefontaine. They began writing each other in 1863, and their friendship deepened into love. Each was a fervent patriot, and their shared devotion to their country was a significant fact of their relationship. They were married in 1865.

An epilogue tells what happened to Hopkins after June of 1865: his career, his family, and his death in 1902. Originally published in1961, this work is now available for the first time in paperback.
AUTHOR BIOGRAPHY
Otto F. Bond was the William Rainey Harper Professor of French at the University of Chicago. He was the author of many books on French and Spanish literature, and he received the cross of the Legion d'Honneur in 1951. Owen Hopkins was an ancestor of Professor Bond's wife, Julia Hopkins Bond.
TABLE OF CONTENTS