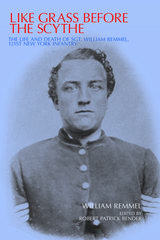 Sergeant William Remmel was a German immigrant who had settled with his parents and family in far upstate New York. His letters collected in Like Grass before the Scythe cover more than two full years of his service and provide details on military and social history in the eastern theater of operations and on the experience of the home front in upstate New York among a largely immigrant, working-class family and community.

Remmel wrote in English and apparently his parents responded in German. In addition to the important material on an immigrant family’s experience, Remmel also deals with the question of slavery, illness and hospital care (when he was wounded), the problem of hard war/total war, as well as the campaigns of Chancellorsville, Gettysburg, and the Shenandoah Valley in 1864.
AUTHOR BIOGRAPHY
Robert Patrick Bender teaches history at Eastern New Mexico University-Roswell and is editor of Worthy of the Cause for Which They Fight: The Civil War Diary of Brigadier General Daniel Harris Reynolds, 1861-1865.
TABLE OF CONTENTS