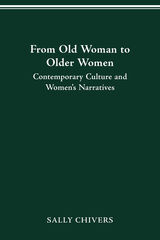 Sally Chivers provides a fascinating look at and challenge to how North American popular culture has portrayed old age as a time of disease, decline, and death. Within contemporary Canadian literary and film production, a tradition of articulate central elderly female characters challenges what the aging body has come to signify in a broader cultural context. Rather than seek positive images of aging, which can do their own prescriptive damage, the author focuses on constructive depictions that provide a basis on which to create new stories and readings of growing old. This type of humanities approach to the study of aging promises neither to fixate on nor avoid consideration of the role of the body in the much broader process of getting older. The progression implied in the title from the solitary symbol of The Old Woman toward a community of older women, indicates not a move toward euphemism, but rather an increasing and necessary awareness of the social and cultural dimensions of aging.

AUTHOR BIOGRAPHY
Sally Chivers is Professor of English at Trent University.
REVIEWS
“Chivers proposes that new standards and strategies for understanding late life in North America must be acquired, arguing that narrative fiction, both in film and on paper, is particularly well suited to help in this process. Exposing the clichéd and reductionist approaches to age pervading our culture—whether it be in radio broadcasts, on TV, in medical textbooks, professional photography or even feminist theory—Chivers effectively shows the potential of the literary constructs she discusses to resist such ageism.”  —Sylvia Henneberg, Morehead State University