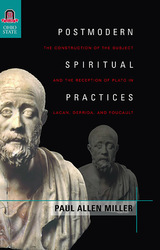 Postmodern Spiritual Practices: The Construction of the Subject and the Reception of Plato in Lacan, Derrida, and Foucault, by Paul Allen Miller, argues that a key element of postmodern French intellectual life has been the reception of Plato. This fact has gone underappreciated in the Anglophone world due to a fundamental division in culture. Until very recently, the concerns of academic philosophy and philology have had little in common. On the one hand, this is due to analytic philosophy’s self-confinement to questions of epistemology, speech act theory, and philosophy of science. As such, it has had little to say about the relation between antique and contemporary modes of thought.
On the other hand, blindness to the merits of postmodern thought is also due to Anglo-American philology’s own parochial instincts. Ensconced within a nineteenth-century model of Alterumswissenschaft, only a minority of classicists have made forays into philosophical, psychoanalytic, and other speculative modes of inquiry. The result has been that postmodern French thought has largely been the province of scholars of modern languages.
A situation thus emerges in which most classicists do not know theory, and so cannot appreciate the scope of these thinkers’ contribution to our understanding of the genealogy of Western thought, while most theorists do not know the Platonic texts and their contexts that ground them. This book bridges this gap, offering detailed and theoretically informed readings of French postmodernism’s chief thinkers’ debts to Plato and the ancient world.
AUTHOR BIOGRAPHY

Paul Allen Miller is Carolina Distinguished Professor of Classics and Comparative Literature at the University of South Carolina.
REVIEWS
“Miller has given us an important and illuminating book that only a
classicist steeped in French poststructural thought could have written.”
—David Wray, University of Chicago