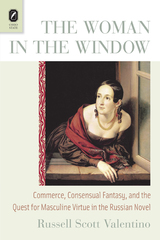 In The Woman in the Window: Commerce, Consensual Fantasy, and the Quest for Masculine Virtue in the Russian Novel, Russell Scott Valentino offers pioneering new insights into the historical construction of virtue and its relation to the rapidly shifting economic context in modern Russia. This study illustrates how the traditional virtue ethic, grounded in property-based conceptions of masculine heroism, was eventually displaced by a new commercial ethic that rested upon consensual fantasy. The new economic world destabilized traditional Russian notions of virtue and posed a central question that Russian authors have struggled to answer since the early nineteenth century: How could a self-interested commercial man be incorporated into the Russian context as a socially valuable masculine character?

With chapters on Gogol, Tolstoy, and Dostoevsky as well as Pasternak and Nabokov, The Woman in the Window argues that Russian authors worked through this question via their depictions of “mixed-up men.” Such characters, according to Valentino, reveal that in a world where social reality and personal identity depend on consensual fantasies, the old masculine figure loses its grounding and can easily drift away. Valentino charts a range of masculine character types thrown off stride by the new commercially inflected world: those who embrace blind confidence, those who are split with doubt or guilt, and those who look for an ideal of steadfastness and purity to keep afloat—a woman in a window.
AUTHOR BIOGRAPHY
Russell Scott Valentino is professor and chair in the Department of Slavic Languages and Literatures at Indiana University, Bloomington.