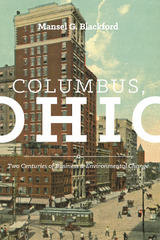 Columbus, Ohio: Two Centuries of Business and Environmental Change examines how a major midwestern city developed economically, spatially, and socially, and what the environmental consequences have been, from its founding in 1812 to near the present day. The book analyzes Columbus’s evolution from an isolated frontier village to a modern metropolis, one of the few thriving cities in the Midwest. No single factor explains the history of Columbus, but the implementation of certain water-use and land-use policies, and interactions among those policies, reveal much about the success of the city.

Precisely because they lived in a midsize, midwestern city, Columbus residents could learn from the earlier experiences of their counterparts in older, larger coastal metropolises, and then go beyond them. Not having large sunk costs in pre-existing water systems, Columbus residents could, for instance, develop new, world-class, state-of-the-art methods for treating water and sewage, steps essential for urban expansion. Columbus, Ohio explores how city residents approached urban challenges—especially economic and environmental ones—and how they solved them.

Columbus, Ohio: Two Centuries of Business and Environmental Change concludes that scholars and policy makers need to pay much more attention to environmental issues in the shaping of cities, and that they need to look more closely at what midwestern metropolises accomplished, as opposed to simply examining coastal cities.
AUTHOR BIOGRAPHY
Mansel G. Blackford is Professor Emeritus at The Ohio State University.
TABLE OF CONTENTS
COLUMBUS, OHIO: Two Centuries of Business and Environmental Change
Half Title Page
Title Page
Copyright
Dedication
CONTENTS
ILLUSTRATIONS
ACKNOWLEDGMENTS
INTRODUCTION: Columbus throughout Two Hundred Years
CHAPTER 1: Two Centuries of Business Development
Economic Development in Ohio
Columbus as a Commercial City
William Neil, Transportation, and Real Estate
Columbus as an Industrial Metropolis
Samuel Prescott Bush and Buckeye Steel Castings
Columbus as a Financial, Educational, and Service Center
Murray D. Lincoln and Nationwide Insurance
Business Development in a Midwestern City
CHAPTER 2: The Role of Water in Shaping Columbus
Local, Fragmented Water Systems
The Use and Abuse of the Scioto River
Water Use in American Cities before 1870
Changing Ideas and the Movement toward Citywide Water Systems
A Quest for Clean Water in Columbus
The Great Columbus Experiment
Water Improvements during the Progressive Era: The Importance of Public Policy
CHAPTER 3: Water and the Development of Columbus
The Great Flood of 1913
Columbus’s Water and Sewer Systems between the Wars
The Continuing Search for Water after World War II
Environmental Concerns and Public Policies
The Importance of Water in the Development of Columbus
CHAPTER 4: Land Use in a Changing City
Land Use in the New Capital City
The First Parks in Columbus
Streetcars, Urban Expansion, and Amusement Parks
The 1908 City Beautiful Plan
The City Beautiful Plan and the Neighborhoods
Land Use and Planning during the Progressive Era
CHAPTER 5: Land Use and Urban Development
Public Zoning and Private Covenants
The Development of Upper Arlington
The Downtown, Neighborhoods, and Shopping Centers
Living in Columbus
Land-Use Policies and Realities over Two Hundred Years
CONCLUSION: Columbus in 2012
APPENDIX: Populations of Ohio Columbus and Other Cities, 1800–2010
BIBLIOGRAPHIC ESSAY
INDEX