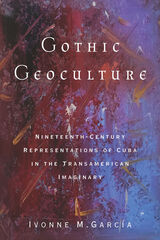 In the nineteenth century, the island of Cuba was a popular site for US travelers, who wrote dozens of travelogues about their experiences. At the same time, Cuban exiles living in the United States, escaping from Spanish colonial repression, wrote about their island and about their US experiences. Within the trove of writings about Cuba in relation to slavery and a rising US empire in the region, Ivonne M. García’s Gothic Geoculture: Nineteenth-Century Representations of Cuba in the Transamerican Imaginary shows how a group of writers, on both sides, used the language of fear to construct gothicizations of the island (and of the United States) through tropes of corruption, doubleness, and monstrosity. García coins the term “gothic geoculture” to show Cuba’s identity in the nineteenth century as existing at the crossroads between colonialism, slavery, and transamericanity. Specifically looking at a period of colonial anxiety between 1830 and 1890, García exposes the ways some writers code Cuba as dangerous and destructive, demonstrating how these transamerican figurations created a series of uncanny simultaneities that expand on and complicate the ways we understand how Cuba and the hemisphere were imagined at that time.
AUTHOR BIOGRAPHY
Ivonne M. García is Associate Professor of English at Kenyon College.
TABLE OF CONTENTS