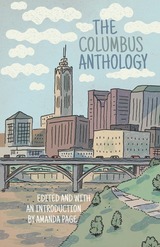 Columbus, Ohio, is a place whose identity centers on its supposed lack of identity—an American “every place” that has launched countless chain dining concepts. Enter the contributors to this wide-ranging volume, who are all too happy to fight back against that reputation, even as they recognize it as an inevitable facet of the ever-growing city they call home. “Maybe we’re not having trouble designing a definitive identity,” writes Amanda Page in her introduction. “Maybe we are a city that is constantly considering what it will become.”
Race, sports, the endless squeeze of gentrification, the city’s booming literary and comics scenes, its reputation as a haven for queer life, the sometimes devastating differences in perspective among black and white, native and transplant residents—and more than one tribute to Buckeye Donuts—make this anthology a challenging and an energizing read. From Hanif Abdurraqib’s sparkling and urgent portrait of Columbus’s vital immigrant culture as experienced through Crew games to Nick Dekker’s insights into breakfast as a vehicle for getting to know a city to the poetry of Maggie Smith and Ruth Awad, the pieces gathered here show us a Columbus far more textured than any test marketer could dream up.
AUTHOR BIOGRAPHY
Amanda Page is an essayist and educator in Columbus, Ohio.
REVIEWS
“What a vibrant, diverse collection of voices. The Columbus Anthology is a memorable chorus from a city too often overlooked.” —Lee Martin, author of Pulitzer Prize–finalist The Bright Forever


“Most all of us have love/hate relationships with our hometowns. But what’s remarkable here are the myriad lenses through which the writers in this anthology view Columbus, its residents, its histories and everchanging present. This is a bountiful collection I will read again and again!” —Kathy Fagan, author of Sycamore

TABLE OF CONTENTS
THE COLUMBUS ANTHOLOGY Edited and with an Introduction by Amanda Page
Half Title Page
Title Page
Copyright Page
Contents
Columbus by MAGGIE SMITH
Introduction by AMANDA PAGE
Five Reasons Why Writers Should Move to Columbus by ANNIE McGREEVY
Buckeye to All That by MANDY SHUNNARAH
I’m Here to Win by HARMONY COX
Art in a City That Can Kill You by SCOTT WOODS
Every Day I Ride the Bus by DAVID BREITHAUPT
Swole for the Revolution by MERYL WILLIAMS
The Blue Jackets Have Turned Columbus into a Major League City by JEFF SVOBODA
Sitting Out the Anthem: Reflections on the Columbus Blue Jackets, Racism, and Protest by DAN SKINNER
Military Appreciation: An Everygame Affair
What the Hell Is a Blue Jacket?
A New Norm
Anthems, Protests, and Hockey
Hockey, Race, and the Politics of Protest
Sitting It Out in the Age of Trump
In a City Marked by Change, Columbus Crew SC Remains a Powerful, Unifying Force by HANIF ABDURRAQIB
The City That Raised Me Has a New Face by TIFFANY WILLIAMS
What Would Jane Say? by SARAH MARSOM
Where the Sidewalk Ends by STACY JANE GROVER
Life in Franklinton by GREG PHILLIPS
Breakfast with Columbus by NICK DEKKER
Consider the Johnny Marzetti by SHELLEY MANN HITE
What Ain’t to Be, Just Might Happen
Pre-Fab City
One History of Columbus Music
Welcome to Flat City
The Columbus Sound
Can’t Last by BELA KOE-KROMPECHER
Van Sciver in Columbus by NOAH VAN SCIVER
In the Silent City She’s Yearned For by JEN TOWN
Cactus by JEN TOWN
Diorama Turned to Ashes by JEN TOWN
Black Woman Repetition (After Terrance Hayes) by BARBARA FANT
Magic Before/Before Magic by BARBARA FANT
Long Line of Strong Women by BARBARA FANT
Transplant by FAYCE HAMMOND
Fear of Fuel by FAYCE HAMMOND
Main Street by ROSE M. SMITH
Billboard, 2013 by ROSE M. SMITH
Ackerman Place by PSYCHE NORTH TOROK
Nighthawks: (Buckeye Donuts) by JOSEPH HESS
American Folklore by ADAM J. GELLINGS
The Whales Are Always Feeding by ETHAN RIVERA
Justice Be Like by ETHAN RIVERA
Shapes Heard Free by DARREN DEMAREE
Do the Right Thing by CHARLENE FIX
Ornithology by GEOFF ANDERSON
Phasmophobia by GEOFF ANDERSON
Flyover Country by STEVE ABBOTT
Hold Me Like Ohio by AMY TURN SHARP
Summertime by ROBERT COLBY
Walking in the Topiary Park After Snowfall in February by JEREMY GLAZIER
On the First Snowfall by WILL EVANS
Auribus Teneo Lupum by WILL EVANS
The New Oath by HANNAH STEPHENSON
Table Manners by FARIHA TAYYAB
Thanksgiving by FARIHA TAYYAB
The Dead Walk Over Your Land by RUTH AWAD
Inventory of What Remains by RUTH AWAD
Taillights by RUTH AWAD
Some Friday by ANDREW ANDERSON
Acknowledgments
Contributors
Belt Publishing Series Page