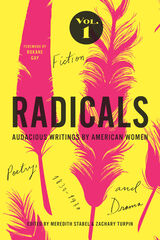 Kate Chopin on pot smoking. Pauline Hopkins on alchemy and the undead. Sui Sin Far on cross-dressing. Emma Lazarus and Angelina Weld Grimké on lesbian longing. Julia Ward Howe on intersexuality. Perhaps the first of its kind, Radicals is a two-volume collection of writings by American women of the nineteenth and early twentieth centuries, with special attention paid to the voices of Black, Indigenous, and Asian American women.

In Volume 1: Fiction, Poetry, and Drama, selections span from early works like Sarah Louise Forten’s anti-slavery poem “The Grave of the Slave” (1831) and Fanny Fern’s Ruth Hall (1855), a novel about her struggle to break into the male-dominated field of journalism, to Charlotte Perkins Gilman’s revenge fantasy, “When I Was a Witch” (1910) and Georgia Douglas Johnson’s poem on the fraught nature of African American motherhood, “Maternity” (1922). In between, readers will discover many vibrant and challenging lesser-known texts that are rarely collected today. Some, indeed, have been out of print for more than a century.

Unique among anthologies of American literature, Radicals undoes such silences by collecting the underrepresented, the uncategorizable, the unbowed—powerful writings by American women of genius and audacity who looked toward, and wrote toward, what Charlotte Perkins Gilman called “a lifted world.”

Meredith Stabel is a PhD candidate in English at the University of Iowa. She lives in Iowa City, Iowa.

Zachary Turpin is assistant professor of American Literature at the University of Idaho. He is the author and coeditor of such works as Every Hour, Every Atom: A Collection of Walt Whitman’s Early Notebooks and Fragments (Iowa, 2020). Turpin lives in Moscow, Idaho.