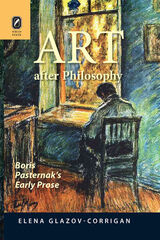 Art after Philosophy: Boris Pasternak’s Early Prose, by Elena Glazov-Corrigan, redefines an area in Slavic studies which has suffered from neglect for several decades, namely, Pasternak’s early prose narratives. In her bold new study, Glazov-Corrigan analyzes the conceptual networks of thought Pasternak developed when he turned to literature after abandoning the study of Neo-Kantianism in Marburg during the summer of 1912. This book shows conclusively that Pasternak’s knowledge of philosophy is inseparable from his prose works, even though in his early stories and novellas (1913–1918) philosophical ideas operate neither as discrete textual units nor as micro-elements or clusters of possible signification. In the early Pasternak, philosophy becomes a narrative art, a large-scale narrative frame, a manner of seeing rather than of constructing reality.

After Roman Jakobson’s famous 1935 essay, which characterized the early Pasternak as a “virtuoso of metonymy,” in contrast to the metaphoric Mayakovsky, no other approach has been able to generate comparable scholarly influence. The present study takes up the implicit challenge of this critical impasse. Entering into a debate with Jakobson’s findings, Art after Philosophy illuminates Pasternak’s boldest artistic experiments and suggests to his readers entirely new ways of approaching not only his early but also his later writing.
AUTHOR BIOGRAPHY
Elena Glazov-Corrigan is associate professor of Russian and comparative literature at Emory University.
REVIEWS
“By bringing the philosophical studies Pasternak had just abandoned to bear on his early prose, Elena Glazov-Corrigan transforms this seemingly inhospitable terrain into a fruitful zone that illuminates the early phases of the writer’s career and, what is more, significantly enriches our reading of his subsequent literary trajectory. Thanks to Glazov-Corrigan’s study, the awkward jostling of his early and late periods that has been the sine qua non of Pasternak studies gives way to a vision of his creative unfolding.” —Olga Peters Hasty, professor of Slavic languages and literatures, Princeton University

“Art after Philosophy is of extraordinary importance. It is filling a gap strongly felt by Pasternak scholars aware of these materials, but without the philosophical background, the German language ability, the ambition to explore these materials in the detail required to undertake such a study.” —Karen Evans-Romaine, associate professor of Slavic languages and literature at the University of Wisconsin–Madison

TABLE OF CONTENTS
Contents
Abbreviations
Acknowledgments
Introduction
Chapter 1: The Character of Philosophical Influence in Pasternak’s Early Prose
1.1 Safe Conduct: Farewell to music and the soul’s stretched wings
1.2 Seeing the fate of philosophy “in the flesh”
1.3 Between Leibniz and Neo-Kantianism: Archival data and Boris Pasternaks Lehrjahre
1.4 The multi-voicedness of philosophical themes searching for literary nourishment
Chapter 2: Similarity and Contiguity in Pasternak’s Early Poetics and Their Philosophical Underpinnings
2.1 Pasternak’s “justification through metaphor”
2.2 The “unparalleled analytical clarity of Hume”
2.3 Perception, contiguity, and Immanuel Kant’s a priori of time and space
2.4 Beyond “The Wassermann Test”: Contiguities and their characterization in Roman Jakobson’s essays and Boris Pasternak’s early prose
Chapter 3: Arguing with the Sun in “The Mark of Apelles”
3.1 Poetry born in darkness: Toward an unwritten philosophical aesthetics
3.2 “I have dug into idealism to its very foundation”
3.3 The composition of “The Mark of Apelles” and its “vertical saturation”
Chapter 4: “Letters from Tula”: “Was ist Apperzeption?”
4.1 “Was ist Apperzeption?” Finding a fruitful approach to “Letters from Tula”
4.2 Between love and art in the world of reflections: The adjustment of the protagonists’ gaze
4.3 Searching for synthesis: Art, play-acting, and film actors from Moscow
4.4 Between to kalon and to agathon: Cohen’s Neo-Kantianism, the fire of conscience, and Lev Tolstoy’s gift of perception
4.5 Tolstoy, the Tolstoyans, and the living characters of fictional space: Autonomous transcendental consciousness versus a created living world of perceived and perceiving selves
Chapter 5: Contextualizing the Intellectual Aims of 1918: From “Letters from Tula” to The Childhood of Luvers
5.1 The “spirituality” of prose: “It is important to visit a person when he is whole”
5.2 “Three groups”: Three levels of reality in “Ordering a Drama”
5.3 The limitations of psychology: Neo-Kantians in dispute with David Hume
5.4 Beyond the metonymous self: Moving beyond traditional readings of the novella
Chapter 6: “The Long Days” in The Childhood of Luvers: Chronology of a Permeable Self
6.1 Transition from infancy to early childhood: Zhenya’s first awareness of the world beyond
6.2 Childhood: Acquaintance with still life and the quiet plasticity of the northern daylight
6.3 The boundary of spring and the outlines of the soul: New kindredness with nature at the appointed time
6.4 The boundary of summer: An infinitely expanding world approaching limits within the unlimited
6.5 Table I: Chronology of a permeable self: “The Long Days” of Detstvo Luvers
Chapter 7: “The Stranger” in The Childhood of Luvers: Disruptions in Chronology and the Collision with Other Worlds
7.1 The boundary of fall: Erased faces of others and turpentine sun
7.2 Metaphoric narrative and spirits meeting at the threshold: Reading Lermontov’s Demon at sunset
7.3 What does Tsvetkov do? The world of the indefinable other
7.4 In the sanctuary of the sacristan Defendov
7.5 “Three Names” and the construction of the “Demonic” or spirit-bearing protagonist
7.6 Alexander Scriabin and “the freshness of his spirit”
7.7 Philosophical overtones of the indefinable Tsvetkov
7.8 Sensing transition: Temporal and spatial complexities of the conclusion
7.9 Table II: Disruptions of chronology and the collision of multiple worlds in “The Stranger”
Chapter 8: Conclusion. Pasternak’s Symbolic World: Prose and Philosophy
8.1 Assessing Pasternak’s later view of his early prose
8.2 Metaphor and metonymy: Pasternak’s philosophical studies and their role in his early prose
8.3 New symbolism: Toward “the soul” of the later prose
Bibliography
Index of Works by Boris Pasternak
General Index