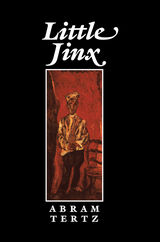 Northwestern University Press, 1992
Paper: 978-0-8101-1041-0
Little Jinx is a canny mockery of the Soviet world. Its author, Andrei Sinyavsky, a respectable member of the USSR's Institute for World Literature, was exposed in 1965 as the real author of a series of irreverent essays and fantastic tales that had been circulating under the nom de plume Abram Tertz. After five years in a labor camp he immigrated to Paris. Little Jinx is the tale of a man named Sinyavsky, a literary hack and runt who clumsily survives repression and anti-Semitism but also brings misery to those around him. When this "little jinx" inadvertently causes the death of his five brothers, he is consumed by a guilt that seems universal in his society.
AUTHOR BIOGRAPHY
Abram Tertz is the pseudonym of Andrei Sinyavsky, the exile Soviet dissident writer whose works have been compared to fabulists like Kafka and Borges. Tertz's settings are exotic but familiar and as compelling as those of lunatics and mystics.
TABLE OF CONTENTS