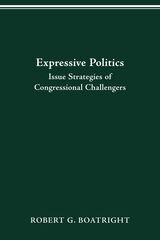 The advantage incumbent members of Congress hold over their opponents in campaigns for office has steadily grown over the past five decades. While students of congressional politics have analyzed the effect of this advantage on members' behavior in office, little is known of its effect on their opponents. Sitting members of the House frequently face underfinanced and obscure challengers. Conventional theories of electoral competition assume that the only hope those candidates have of even coming close to making such an election competitive is to align their policy positions as closely as possible to those of the median voter. Yet challengers to incumbents often run on quite extreme position platforms. In the majority of these uncompetitive races, Robert G. Boatright explains, a new type of politics is emerging—a politics of expressive campaigning, where challengers seek to use their campaigns as a platform for their own views and as a means of helping their party achieve goals other than winning the election at hand.

This research makes two types of contributions to existing political science literature. On a theoretical level, it argues for a reconceptualization of the motives of candidates and parties in rational choice analysis. On a practical level, it seeks to enrich our understanding of the role that challengers play in American elections and of the reason why different types of challengers emerge in different types of elections. Boatright argues that the role of challengers in the American electoral process can be understood only if we broaden our theories about rational candidate behavior.
AUTHOR BIOGRAPHY
Robert G. Boatright is assistant professor of government, Clark University.
REVIEWS
"Expressive Politics argues that, contrary to the famous median voter theorem, some candidates can rationally choose comparatively extreme positions. For those candidates who believe their own chances for winning are quite low, the purpose of the campaign is not to adopt an issue stance that will maximize support but, rather, to engage in expressive politics. This insightful book establishes some important, intriguing facts about campaigning choices that are not obvious."
— Brian Gaines, University of Illinois