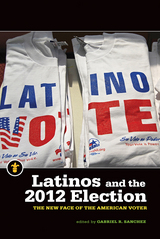 In giving President Obama a record level of support (75 percent) and reaching a watershed 10 percent of the voting population, Latinos proved to be decisive in the 2012 election outcome—an unprecedented mark of influence for this segment of the wider electorate. This shift also signaled a radical reenvisioning of mobilization strategies by both parties and created a sea change in the way political organizations conduct outreach and engagement efforts. In this groundbreaking volume, experts in Latino politics ask: What is the scope of Latino voter influence, where does this electorate have the greatest impact, and what issues matter to them most? They examine a key national discussion—immigration reform—as it relates to voter behavior, and also explore the influence of Latinos within key states, including California, Colorado, New Mexico, Virginia, North Carolina, Ohio, Nevada, and Florida. While some of these states have traditionally had strong Latino voting blocs, in others Latinos are just emerging as major players electorally. The book also discusses the extent to which Latinos were mobilized during the 2012 campaign and analyzes election outcomes using new tools created by Latino Decisions. A blend of rigorous data analysis and organizational commentary, the book offers a variety of perspectives on the past, present, and future of the Latino electorate.
AUTHOR BIOGRAPHY
Gabriel R. Sanchez is Associate Professor of Political Science at the University of New Mexico and Executive Director of the Robert Wood Johnson Foundation Center for Health Policy at the University of New Mexico. He is also the Director of Research for Latino Decisions.
TABLE OF CONTENTS
Contents
Foreword, by Rubén O. Martinez
Preface
Acknowledgments
Introduction
Latino Influence and the Electoral College: Assessing the Probability of Group Relevance, by Justin H. Gross and Matt A. Barreto
Proactive, Reactive, and Tactical: Mobilizing the Latino Vote in 2012, by Ricardo Ramírez, Evan Bacalao, Edelmira P. Garcia, Rani Narula-Woods, and Clayton Rosa
Immigration: Defining Candidates, Deciding Elections, by Maribel Hastings
The 2012 Latino Vote in Colorado, by Robert R. Preuhs
The 2012 Latino Vote in New Mexico: Immigration Emerges in Unexpected Ways, by Gabriel R. Sanchez and Shannon Sanchez-Youngman
The Reconquista of California: Latinos and the 2012 Election, by Jason L. Morin and Adrian D. Pantoja
Brown Ballots in the Buckeye State, by Tehama Lopez Bunyasi
The New Virginiano Electorate and the Politics of Immigration in Virginia, by D. Xavier Medina Vidal
North Carolina Latinos: An Emerging, Influential Electorate in the South, by Betina Cutaia Wilkinson
Florida’s Latino Electorate in the 2012 Election, by Casey A. Klofstad
It’s the Economy Stupid? Not So Fast: The Impact of the Latino Vote on the 2012 Presidential Election in Nevada, by David F. Damore
Looking to 2014 and Beyond, by Matt A. Barreto, Sylvia Manzano, and Gary Segura
Appendix: Discussion of the Data Utilized in this Volume, by Gabriel R. Sanchez
Contributors
REQUEST ACCESSIBLE FILE