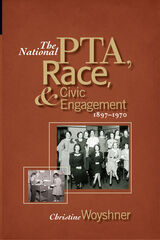 Founded in 1897 as the National Congress of Mothers, the National Parent Teacher Association (PTA) was open to African American members but excluded them in practice. In 1926, a separate black PTA was created to serve the segregated schools of the American South. After the Brown v. Board of Education decision in 1954, black and white PTA leaders faced the difficult prospect of integrating all national, state, and local units, which resulted in a protracted unification process that lasted until 1970.

In The National PTA, Race, and Civic Engagement, 1897–1970, Christine Woyshner examines the PTA in relation to its racial politics and as a venue for women’s civic participation in educational issues. Her argument is that the PTA allowed for discussions about race and desegregation when few other public spaces, even the schools, did so during this time. The PTA, the largest voluntary educational association in the twentieth century, has over the course of one hundred years lobbied for national legislation on behalf of children and families, played a role in shaping the school curriculum, and allowed for participation of diverse community members in dialogue about the goals of public schooling.

AUTHOR BIOGRAPHY
Christine Woyshner is an associate professor in the Department of Curriculum, Instruction, and Technology in Education at Temple University.
TABLE OF CONTENTS
Contents
List of Illustrations
Acknowledgments
Introduction. The National PTA, Race, and Civic Engagement
Chapter 1. “No Hats to Be Worn”: Organizing the National Congress of Mothers
Chapter 2. “To Work More Effectively and Gain Better Leadership Experience”: The Founding of the National Congress of Colored Parents and Teachers
Chapter 3. “For Convenience of a Better Education and Training for My People”: Organizational Growth and Stability
Chapter 4. Making America “Strong from Within”: School Lunches, Civics, and Intergroup Relations
Chapter 5. Diminishing as It Advanced: The Unification of the PTA
Epilogue. Civil Society and Public Education
Appendix. Archives
Notes
Works Cited
Index