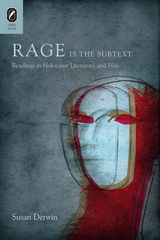 Rage Is the Subtext charts the internal shifts of Holocaust survivors who tell their stories of suffering, loss, and endurance. Susan Derwin locates the healing effect of literary testimony in its capacity to represent the reactions of survivors to traumatic experience, while concealing other more unsettling responses from view. Beneath the explicit concerns of works by Primo Levi, Saul Friedländer, Binjamin Wilkomirski, Imre Kertész and Liliana Cavani, Derwin uncovers unspoken reserves of rage, which then become legible as formal properties of the text.

Drawing upon the analytic writings of D. W. Winnicott, Jean Améry, and others, Derwin identifies the volatile affect encrypted in testimonial narrative with experiences of social abandonment. She argues that, after liberation, many survivors were beset by an irresolvable ambivalence: on one side, they bitterly blamed their communities for abandoning them during the Holocaust; on the other, they desperately needed reconciliation with those communities in order to heal. For this reason, bearing witness became a crucial activity that contained and metabolized the survivor's rage so that an engaged life could become possible.
AUTHOR BIOGRAPHY
Susan Derwin is associate professor in the Department of Germanic, Slavic, and Semitic Studies and chair of the Program in Comparative Literature at the University of California, Santa Barbara.