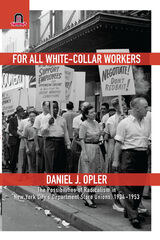 In recent decades the American labor movement has fallen on hard times, in part due to its long reliance on blue-collar workers for its membership despite the growing importance of retail and service jobs. In For All White-Collar Workers: The Possibilities of Radicalism in New York City’s Department Store Unions, 1934–1953, Daniel Opler examines early efforts to unionize workers in department and retail stores. Beginning with the origins of the modern labor movement in the mid-1930s, Opler argues that Communist labor organizers created vibrant and powerful unions in New York City’s department stores, only to see those unions—and the CIO’s powerful retail workers’ union—destroyed during the McCarthy era.

In the process of examining these unions, Opler takes the reader far beyond union meetings and contract negotiations, exploring the ways in which consumption, urban life, and changing understandings of public space affected the unions in these eras. As a result, For All White-Collar Workers becomes an exploration of such diverse subjects as the conflicts over midtown Manhattan, the 1939–1940 New York World’s Fair, the link between consumption and patriotism during World War II, private housing developments in 1940s New York City, and suburbanization, all viewed through the lens of the rise and fall of New York City’s department store unions.
AUTHOR BIOGRAPHY
Daniel J. Opler is assistant professor of history at the College of Mount Saint Vincent, Riverdale, New York.
TABLE OF CONTENTS