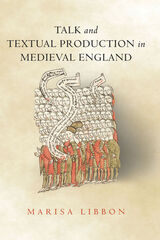 People in medieval England talked, and yet we seldom talk or write about their talk. People conversed not within literary texts, but in the world in which those texts were composed and copied. The absence of such talk from our record of the medieval past is strange. Its absence from our formulation of medieval literary history is stranger still. In Talk and Textual Production in Medieval England, Marisa Libbon argues that talk among medieval England’s public, especially talk about history and identity, was essential to the production of texts and was a fundamental part of the transmission and reception of literature. Examining Richard I’s life as an exemplary subject of medieval England’s class-crossing talk about the past, Libbon advances a theory of how talk circulates history, identity, and cultural memory over time. By identifying sites of local talk about England's past, from law courts to palace chambers, and tracing rumors about Richard that circulated during his life and long after his death, Libbon offers a literary history of Richard that accounts for the spaces between and around extant manuscript copies of Middle English romances like Richard Coeur de Lion, insular and Continental chronicles, and chansons de geste with figures such as Charlemagne and Roland. These spaces, usually dismissed as silent, tell us about the processes of writing and reading and illuminate the intangible daily life in which textual production occurred. In revealing the pressures that talk about the past exerted on textual production, this book relocates the power of making culture and collective memory to a wider, collaborative authorship in medieval England.
AUTHOR BIOGRAPHY
Marisa Libbon is Assistant Professor of Literature and Medieval Studies at Bard College.
TABLE OF CONTENTS
TALK AND TEXTUAL PRODUCTION IN MEDIEVAL ENGLAND by Marisa Libbon
Half Title Page
Series Title Page
Title Page
Copyright Page
Dedication
Contents
Acknowledgments
Abbreviations
Note on Translations and Transcriptions
INTRODUCTION • Tuning Our Ears
ONE • Local Talk and the Retrospective Text
TWO • Public Talk and Legal Fictions
THREE • Talking Pictures in Fourteenth-Century London
FOUR • The Conversant Codex
FIVE • English Rumor and the Modular Manuscript
EPILOGUE • Turning Up the Archive
MANUSCRIPTS CITED
PRIMARY SOURCES
SECONDARY STUDIES
Index
Series Page