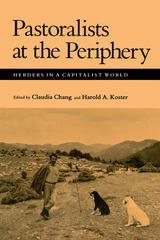 Pastoralists at the Periphery: Herders in a Capitalist World
edited by Claudia Chang and Harold A. Koster
University of Arizona Press, 1994
Cloth: 978-0-8165-1430-4
A Baluch tribesman follows his goats as they search for a bit of vegetation; a Turkana youth guards his father's cattle against theft by raiders.... These pastoral inhabitants of mountain and desert waste are considered to be among the most geographically, economically, and politically peripheral of peoples, yet they are not entirely isolated from broader sociopolitical and economic forces. The lives of modern pastoralists are greatly affected by the policies of nations and the demands of world markets. They may face military control, forced settlement, stock reduction programs, or even efforts at "development" by governments claiming sovereignty over the lands they roam.

The authors of this collection of essays examine the impact of capitalism on nineteenth- and early twentieth century pastoralists and discuss the historical transformations that have occurred in the lives and societies of herding peoples around the world. They argue that pastoralists were not simply passive recipients of change imposed by capitalist polities and that historical and economic factors impinging on their societies were as important as ecological ones. Collectively, these papers demonstrate that twentieth-century pastoralists and their nineteenth-century predecessors should not be seen as immutably locked in a pastoral "mode of production" but rather as actively negotiating encounters between themselves and the expanding power of capitalist states.