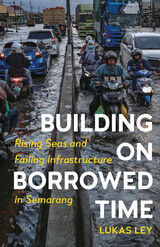 Ice caps are melting, seas are rising, and densely populated cities worldwide are threatened by floodwaters, especially in Southeast Asia. Building on Borrowed Time is a timely and powerful ethnography of how people in Semarang, Indonesia, on the north coast of Java, are dealing with this global warming–driven existential challenge. In addition to antiflooding infrastructure breaking down, vast areas of cities like Semarang and Jakarta are rapidly sinking, affecting the very foundations of urban life: toxic water oozes through the floors of houses, bridges are submerged, traffic is interrupted.

As Lukas Ley shows, the residents of Semarang are constantly engaged in maintaining their homes and streets, trying to live through a slow-motion disaster shaped by the interacting temporalities of infrastructural failure, ecological deterioration, and urban development. He casts this predicament through the temporal lens of a “meantime,” a managerial response that means a constant enduring of the present rather than progress toward a better future—a “chronic present.”

Building on Borrowed Time takes us to a place where a flood crisis has already arrived—where everyday residents are not waiting for the effects of climate change but are in fact already living with it—and shows that life in coastal Southeast Asia is defined not by the temporality of climate science but by the lived experience of tidal flooding.

Lukas Ley is senior lecturer in the Institute of Anthropology (Centre for Asian and Transcultural Studies) at Heidelberg University, Germany.

3. Floating: Endurance and the “Quasi-Events” of Living with Flooding

4. Figuring: Environmental Governance and the Political Affordances of Infrastructure