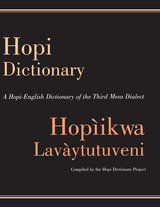 Hopi Dictionary/Hopìikwa Lavàytutuveni: A Hopi-English Dictionary of the Third Mesa Dialect
by Hopi Dictionary Project Hopi Dictionary Project
University of Arizona Press, 1998
Cloth: 978-0-8165-1789-3
Hopi culture has long received considerable attention from the outside world, but the Hopi language has remained much less well known. This is the first true dictionary of Hopi, containing approximately 30,000 entries. The dictionary is based on the dialect spoken today in villages on Third Mesa and was compiled in consultation with a large team of elder Hopi speakers. Its preparation has involved a comprehensive survey of the ethnographic and linguistic literature to identify Hopi vocabulary, and each item found has been checked against existing Third Mesa knowledge of Hopi. The dictionary is valuable not only for the number of its entries but also for its many illustrative sentences and its abundance of information on aspects of Hopi culture, such as often-misunderstood expressions concerning time and space. Main entries, presented for the simplest and most common forms of words, contain full information on inflection in addition to definitions and examples. Cross-references are made for inflected forms that are not easily predictable, such as plurals, less common variants, and combining forms. Many definitions are illustrated with line drawings. The volume also features an English-Hopi word-finder list and a sketch of Hopi grammar, which makes it possible for the user to determine the structure of almost any Hopi sentence. An invaluable reference in Uto-Aztecan languages, this dictionary permits informed reading of Hopi texts. It is a definitive source for understanding not only a language but also a way of life.